Skip to content
News > In Cambodia > CULTURAL OUTINGS, ANOTHER WAY TO LEARN 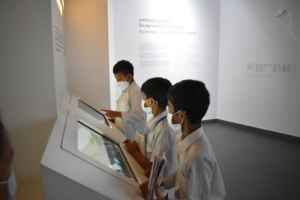 Cultural outings or interventions, yes but why?

Develop and enrich your daily life 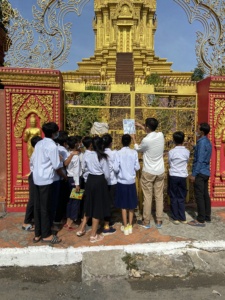 At Taramana, we have chosen to offer several varied and enriching cultural outings to the students every month. We believe that these outings are essential for the children because they awaken their minds and their curiosity and motivate them to be interested in the world around them. For most of them, this is not possible in their daily life, that is why Taramana has an essential role and is always active in offering them varied and adapted outings.

Through a cultural discovery proposed to the children, several elements are taken into account. Indeed, it allows them to tame their feelings and emotions, to develop their sense of observation and listening through a new form of learning. They gain confidence in themselves and develop in a different way.

The daily life of the children of Taramana is not always easy, so these outings allow them to blossom and escape. The cultural activities that we propose with our partners develop their sensitivity to culture. They are an opportunity for them to become interested in new areas and to develop a critical mind. Above all, it represents an awakening, followed by a moment of sharing and complicity.

Through these early experiences, the child will later develop his or her own opinions and relationship to art and culture. According to the Ministry of Culture: “The artistic and cultural awakening conditions the development and the well-being of the child and, beyond, that of each adult person.

Mr. Both, a Khmer teacher at Taramana and recently in charge of the educational outings, explains his vision of things and why he places so much interest in cultural outings: “Children don’t know Khmer culture very well so I think it’s important that from a very young age, we give them the taste to be interested in it and awaken their curiosity.” “Also, I think it’s important for the children of Taramana to see something other than the Center and their daily environment.” “For me, there is a big difference between what students see and read in books or textbooks and the reality, so I want to take them to discover these cultural places.”

We asked Navin, a grade 6 student, why she likes these cultural outings, “It’s important to learn things and to know Khmer culture well. My favorite place to go is the national museum.”

Now, back to the releases of the month of May 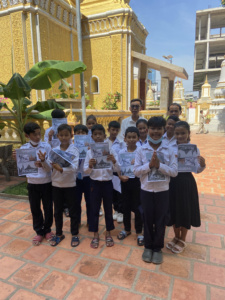 During an outing organized at the end of April, the students of grade 4 and 5, accompanied by their teacher, went to visit one of the most important pagodas of Phnom Penh, “Wat Ounalom”, facing the Tonle Sap River.

This Buddhist foundation dating from the 15th century is considered the main home of Buddhism in Cambodia and is also the residence of the leader of the school of Buddhism, Maha Nikaya, one of the most revered Buddhist patriarchs of Cambodia. During this visit, the students discovered the different temples and gardens with great curiosity and a serene and spiritual atmosphere. They were able to learn more about Buddhism, its philosophies and spiritual teachings. The students also had the opportunity to kneel before the Buddha statue and make offerings.

At the end of the visit, they had the chance to discover the temple’s library, where some manuscripts and archives are still present to detail the history of Buddha. They were able to immerse themselves in the texts written in ancient Khmer and understand the history of Buddhist monks. A strong cultural moment for the Taramana students, who are eager to learn more about the history of their country.💡

Mr. Both likes to teach the students, he particularly likes to reconnect them to their history and culture, that’s why he organized, the day before Thursday May 18th, a public holiday in Cambodia, a projection to explain the origins and rituals of this day.

The children were able to learn a lot about the Bon Chroat Preah Nongkoal, the royal labor ceremony.

This festival, usually held in May, is held to mark the beginning of the rice growing season, with feasts and prayers in the hope of a bountiful harvest. During the ceremony, chanting monks ask the earth spirits for permission to plow. Ceremonial furrows are plowed, rice is spread and offerings are made to the deities. King Norodom Sihamoni, himself, is often involved in some plowing and planting. It is then the turn of the royal oxen, known in Khmer as Usapheak Reach, to make a prediction for the coming year’s harvest. The oxen are given rice, grain, grass, water and wine. If they chose rice or grain, the harvest will go well and wine, that there will be drought.

Discovery of silk at the National Museum of Phnom Penh 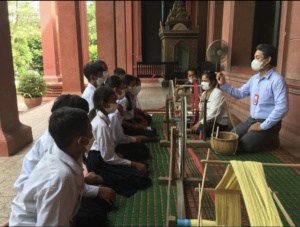 At the end of the month, the children, accompanied by Mr. Both, went to the National Museum of Phnom Penh to discover the exhibition on silk. Explanations on the manufacture and the history of this material at the same time precious and ancestral were with the appointment. The children were able to learn that Cambodian silk has an excellent reputation on the international markets thanks to its quality and its manual production. Cambodia is one of the most renowned producers in the world.

Thus, at Taramana, we believe that these cultural outings are essential for the children’s development and our ambition is to perpetuate the partnerships with the cultural institutes and centers with which we collaborate.