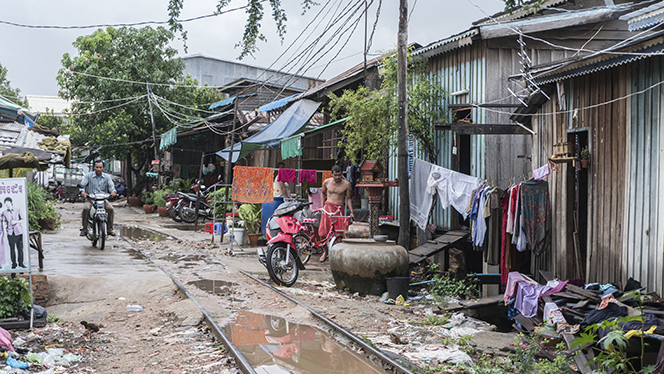 The Taramana Magdalena center is located near the Boeng Salang, in the north part of Phnom Penh, the capital of Cambodia.

Phnom Penh is a city of 2 million inhabitants which is experiencing an important demographic growth. Many Cambodian try to escape extreme poverty and leave the countryside for the city, hoping to find better living conditions.

The situation in Cambodia

Deeply scarred by the war and the tragedy of the genocide perpetrated by the Khmer Rouge, Cambodia is gradually rebuilding itself and has been going through economic growth for a few years.

However, this country of 15 million inhabitants remains one of the poorest countries in South-East Asia and in the world.

According to the World Bank, in 2017, the GNI (Gross National Income) per capita in Cambodia was $1,230. In comparison, this represents:

In this context of extreme poverty, it is difficult for many Cambodians to live in decent conditions.

The residents of Boeng Salang live in extreme poverty along an old abandoned railway.

Accommodations are usually very unsanitary. Entire families live in overcrowded, non-isolated and floodable slums. These living conditions have a direct impact on the health of the people living in the slum:

Under these conditions, children are very often malnourished and in poor health. In Cambodia, chronic malnutrition affects 37% of children under 5 years. This rate may reach 70% in some vulnerable areas such as slums. Most of these children have never been vaccinated and do not benefit from any medical care. Therefore, they are even more exposed to diseases.

The population’s support systems are non-existent and access to education and health care is very limited. Children are often called upon to go out and bring money home. Their education is therefore very succinct, and many children can’t access higher education and can’t hope for a better future.

Given the urgency of the situation, Taramana has chosen to focus its action in this impoverished area of Phnom Penh with the main goal of supporting the education of these children.